Comments Off on Happy 1 year bookiversary to Paradise Point!

In honor of Paradise Point’s bookiversary (1 year already!) I’m giving away a digital copy if you like, share, or comment here. I’ll pick a winner tonight! 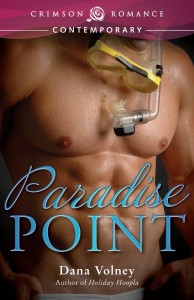 Adam didn’t say a word as he closed the door tightly behind them and led her to the couch where she sat and he knelt in front of her. He slowed his breathing. The events of the night raced through his head. Not the part about the boat and bringing it back to the dock. Work, he could handle. No, the part abo…ut Liv, in the water, gasping for breath and then unconscious. That part. The most terrifying part.

He cupped her head in his hands and softly brought their foreheads together. His thumbs rubbed her temples. The warmth of her otherwise chilled body soothed him. He closed his eyes and focused on her rhythmic breathing.

He separated them, instantly regretting the loss of her body heat. She jostled a little, but he didn’t let go of her face.

“I can’t lose you.” The words tumbled off his lips and he had no regret.

The crew of the Bad To Be Good series is back with NO GOOD TRUTH 💙🖤 This second chances, sexy alpha romantic suspense listen on Scribd will get your heart pumping! www.scribd.com/audiobook/586432539/No-Good-Truth#audiobook #RomanticSuspenseBooks #alpharomance #secondchanceromance #romancebookseriesOne Track Literary Agency ... See MoreSee Less