Eliam Prince is finally where he wants to be in his late father’s shipping enterprise: at the helm and ready to navigate. However, when a mysterious car tries to run him off the road on his first day as CEO, it’s clear he needs a personal bodyguard–even if the idea annoys him to no end. 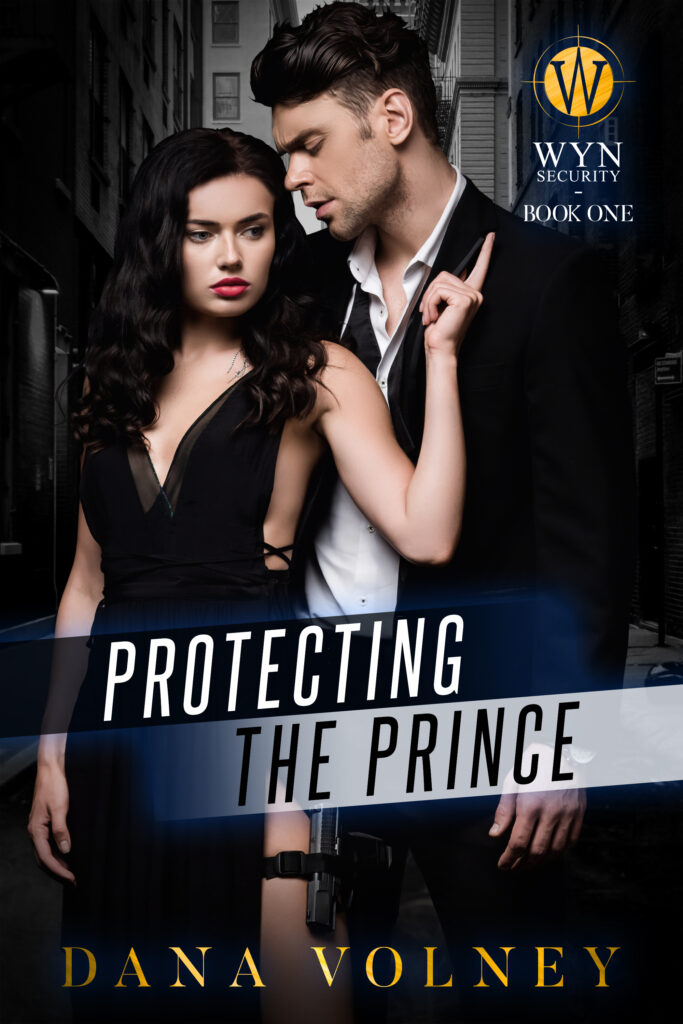 Winter Wyn has built a thriving personal security business after surviving a horrific tour in the Middle East. Eliam is just a routine middle-of-the-night call–until she arrives at his penthouse, where it’s clear her strict policy of not mixing business and pleasure with her clients is in serious trouble. Keeping this man safe–from sabotage, blackmailers, assassins, and his own stubborn pride–isn’t nearly as hard as protecting her own heart.

But as the stakes rise, Eliam and Winter have no choice but to break all the rules if they want to survive. Fans of Castle will love the sparks that fly on this most unlikely couple’s journey to their happily ever after.

Find PROTECTING THE PRINCE on your favorite sites!

“Protecting the Prince will keep your eyes on the page and your mind on high alert. It’s the perfect blend of action and romance.” – Jami Wagner author of The Black Alcove Series

“[Eliam] is the type of man that I’d love to take home with me … Volney has definitely created a light, fun read that melds romance with suspense in a realistic way.” —5 stars, Pure Jonel

“What in the hell were you thinking?”

“That all of this craziness needs to end. Your house blew up. No, don’t shake your head. That isn’t normal or cool or even something that is okay in your line of work.”

“I can take care of myself and my clients. We weren’t even hurt.”

“I had options. I had someone to call, and I was willing to pay their price.” The price being two containers, not one, finding safe passage on his ships. He was screwed if one was detected; adding another had been a no-brainer.

“We would’ve found a way…” She crossed her arms over her chest.

“Really? Because Holland got into this room quickly and had me at gunpoint without you guys even hearing.”

His words had stung her, he could see it in her eyes. He’d meant them to, but now seeing it, he regretted attacking her professional skills.

“We could’ve all died today had I not made that call.” He drove the point home. She was definitely better versed at being in this situation, but he wasn’t and he didn’t want to spend one more hour wondering if a sniper was going to kill him or a bomb was going to be placed outside their hotel door. His company was doing God knows what right now thinking he was dead, and every minute that he wasn’t in charge he felt his dream slide through the cracks of his fingers. This little game someone was playing was ending, and whoever this person was wasn’t winning or getting his company.

“Eddie and Felix had a plan.”

“Okay, I don’t doubt you guys can take care of yourselves. But nothing you can say will convince me I made a bad choice.”

“Why didn’t you talk to me about it? We could’ve worked it out.”

“You’ve kept me half in the dark this entire time. I had no idea what you guys were doing. All I knew was what was in front of me and that it would solve our problems. I wasn’t, and still am not, willing to risk your lives. You are in this because of me. Now, both problems are solved. The Primack family and I have reached an agreement, and Holland has been neutralized. Win. Win.”

“We don’t know who started all of this. There is still someone out there who wants you dead.”

“And they probably don’t have any way to make that happen now.”

“They could decide to do it themselves. Like Holland did today.” Her hand pointed firmly in the direction of where Holland had been standing while holding a gun to his head.

“We’ll cross that bridge when we get there.”

“So, like, what, we’re just supposed to wait until they decide to kill you again? How can we possibly prepare for a lunatic coming after you? I didn’t even get a chance to find out who hired him.”

Winter could believe all she wanted that she was close to getting information out of Holland, but Eliam knew there was no way he intended to tell her anything. Holland had thought he’d won.

“Whoever it was hired him for both you and Franklin,” she persisted.

“So we have narrowed the list and will work it.”

“Oh my God. I can’t believe you. You should not be making these decisions without talking to me first.” Calm and collected Winter was gone, her volume just below yelling and raising with every word.

“You were too busy talking to your boyfriend and the person who hired you to kill me.” His pounding head made it a little more difficult to ease the sound of his frustration building.

Her face scrunched. “And my boyfriend is?”

“That’s been over for a while.”

“I knew there was something there.” And what he’d just won by figuring out that information was a big heaping hunk of jealousy and Winter’s angry blue eyes.

“Settle down. There’s nothing there anymore.”

“Maybe not on your side. Definitely on his.”

“Okay, we need to shelve this for a second and get back to you making deals with the devil when you didn’t need to.”

“Need to? Bomb. Winter, bomb. What part of that don’t you get? If there was someone you could call to deal with this situation, wouldn’t you have made the same decision I did?”

“Exactly,” he said. “There was no question in my mind. I couldn’t let anything happen to you. There’s no way I would’ve been able to reconcile that.”

Grab your copy!! Loved, loved, loved this book!!!The Write One is available now! 📚Writing romance and not actually being in love is tough. Especially when someone calls you out on it. In hindsight, I shouldn’t have dwelled on it, but Lovers Magazine is the it magazine for romance writers. They’ll make or break a career with one review, and me? Well, I wasn’t going down without a fight. I’ll do anything to ensure I stay at the top. Not to mention author of the year is up for grabs.I want that title, and as I said, I’ll do anything to get it.Including spending the next two weeks traveling and working with a woman who despises me, dating a handful of strangers who are selected simply by replying to a survey and letting said woman who doesn’t care for me post the status of those dates online for the entire world to see on my social media accounts.Did I really believe I’d find love over the two-week span of my book tour?No.Did I learn that I can write dozens of romance novels and still know nothing about love?Yep.Turns out, love isn’t always fair, not even after you’ve found the right one.Start reading now 👉 books2read.com/u/br1lqe #enemiestolovers #romancenovels #lovestory #availablenow #newrelease ... See MoreSee Less
View on Facebook
· Share

Happy release day Jami Rogers!!Happy Release Day to A Boyfriend by Christmas!"A Hallmark Channel Christmas movie worthy read." - SOMDReigel (Amazon and Goodreads Reviewer)She’s looking for the one. He just wants a plus-one.This Christmas, tradition is going to be on photographer Lucy Adam’s side. She’ll finally find Mr. Right and marry him at the gazebo at Melody Square Park, where her late parents tied the knot. There’s just one snag in her plan. Scrooge, aka Carter Evergreen, plans to demolish the park. She needs all the mistletoe she can muster now that her goal has an expiration date.Lucy has always been the girl next door—literally—and the one that got away. If she wants to find her true love, Carter’s happy to provide dating advice if she’ll be his plus-one at business functions. And to sweeten the pot, he’ll consider her ideas to save the park, too.But Carter also knows the property is unstable and repairs are too costly. As they grow closer, he’s willing to do anything to save this holiday season for her—except grant her what she wants most. Can their partnership build the real foundation they need to create a magical future?Get your copy 👉http://alturl.com/88rop ... See MoreSee Less
View on Facebook
· Share