When a mission goes sideways and leaves seasoned spy Arabella Nox with valuable information and a terrorist on her heels, she seeks out the one person on earth she hopes won’t betray her: the husband she hasn’t spoken to in 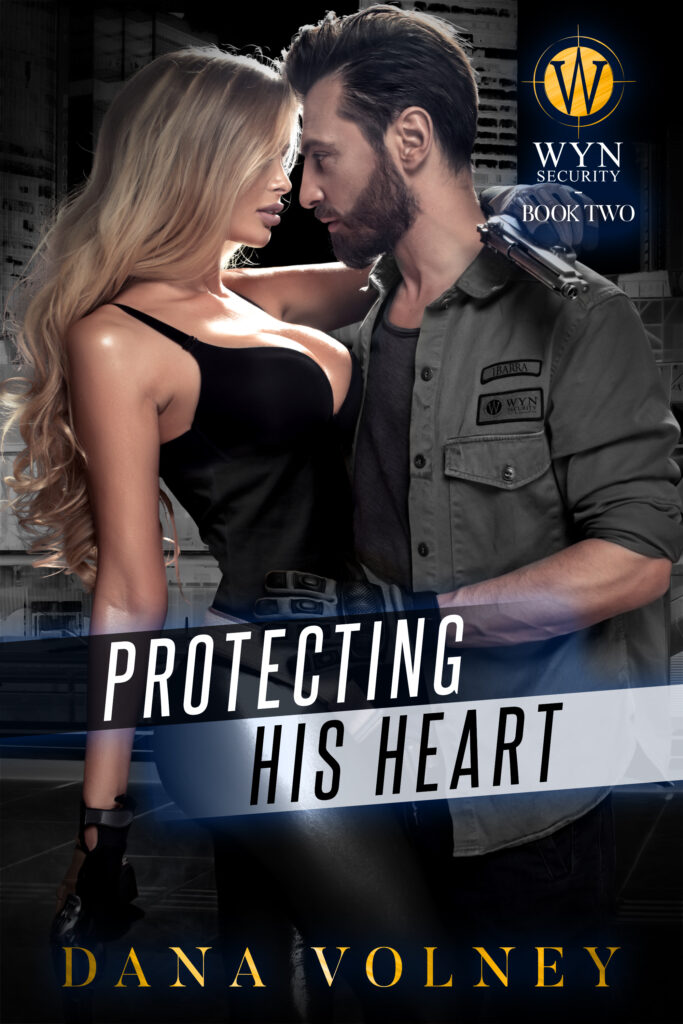 Felix Ibarra thought he’d put his past behind him, so he’s shocked when Arabella shows up naked in his bed, warning him of an imminent threat. Then, to make things worse, she gets a job with his firm, Wyn Security, behind his back. It’s clear there’s more to her story, but trust doesn’t come easily to either of them.

Can Felix and Arabella work together to banish a mutual enemy, or will the deep emotions that tore them apart the first time be their undoing once again?

This sexy cat-and-mouse game between former lovers will keep you on your toes all the way to the surprising ending.

Find PROTECTING HIS HEART on your favorite sites!

“I loved being caught up in the chemically explosive relationship between them. Volney backs these characters up with an intensely suspenseful plot. She brings the world of bodyguards and spies to life in a realistic yet unmistakably exciting way.” – – 5 stars, Pure Jonel

“A riveting tingling romantic suspense that is filled with action, twist and turns, and of course a second chance at love!!!!” – – 4 stars, Four Chicks Flipping Pages

Now that he was looking at her, she wasn’t sure she liked it.

“I’m going to help you, as I said last night, but I have one condition.” His gaze was steady and there was no hint of a smile on his lips.

She nodded and set her piece of bacon back on her plate. With Felix the caveat could be damn near anything.

His lips turned down and her belly flipped. “We’re going to sign divorce papers.”

She always expected regret to fill her after their steamy encounters, but it never did. Ever. There was not one kiss, touch, or moan she’d ever take back where Felix was concerned. In an alternate universe, they would’ve settled down in a taupe house with a white picket fence and be on child number four. Sometimes she dreamed about that universe—sometimes the picture of it made her tear up. And other times she thanked her lucky stars they’d never given the whole marriage thing much of a try. They hadn’t lasted long in bliss.

Their problems never stemmed from lack of emotions; it was the opposite. They had too many. She always worried about what danger he had put himself in the middle of. It was hard to love someone who might be lost to this world forever at any given moment. A loss you might not know about for months. Being apart had proved to be too much for them to sustain a marriage. For both of them. They’d drifted, not ever wanting to say the words.

But was he really telling her he wanted a divorce? Legal and everything? They would be done. They wouldn’t find each other anymore.

“Deal.” The word passed through her lips before she debated her answer to death and showed weakness. She’d have no future if Felix didn’t agree to help her. But was it worth gaining a future if she had none?

Grabbing toast off her plate—because now she needed something to calm her upset insides—she stood. “Ready?”

“Winter texted me. They might’ve gotten some intel we can use.”

Great. The sooner they got going on that information, assuming it was good, the quicker the threat against her would be eliminated and the sooner she could leave. She didn’t know where she’d go, but there had to be someplace where she could find the elusive white picket fence.

Arabella hung a right at the next light. Felix was waiting at home and she was late for their six-year anniversary. Doctor’s offices were not known for their timing and the minutes she’d spent in the car just sitting there hadn’t helped her schedule either. Turned out birth control wasn’t as effective as she’d thought. Six weeks.

Their new start at life together was going so well—it had never been better and she knew he wouldn’t leave her, but fear still crept in. Did she even know how to be a mom? She’d been raised by nannies.

She touched her stomach. Baby. There’s a living human inside me. A tear rolled down her cheek as she pulled into the drive way. Their driveway. They’d just bought a house in Magnolia, on the outskirts of downtown Seattle, and a baby meant a lot more expense.

Good thing Winter had decided to give her the personal protection job back at Wyn Security. But now she wasn’t sure Felix was going to like her in the field. Well, he was just going to have to get used to it. She was kick ass and their baby was going to be, too. Baby Ibarra.

She glanced at her left hand. The silver ring studded with diamonds sparkled. She was getting everything she wanted. She had Felix. Now they had a baby to think about and there was a white picket fence in their front yard—Felix had made sure of it.

“Okay little one. Let’s go tell Daddy.” Daddy. Holy shi—crap. She had to watch her language now. Their lives were going to change. A lot. Was she ready for more change? Her life had done a complete one-eighty in the last six weeks.

She walked through the door connecting the garage and house and into the living room.

“Out here,” he shouted from the patio.

She set down her purse on their round kitchen table and took a big breath. This wasn’t something she just wanted to blurt out, but there was no way she could keep it in much after a hello kiss.

She took a big breath and followed his voice outside. White lights were hung on the pergola, candles burned on their wooden table, and a big bouquet of red roses were in the middle.

“Felix. This is beautiful.” She wrapped her arms around his neck and kissed him long and deep. These were the last few seconds he ever had to not know he was a father.

Right now it was just the two of them. Sort of. She resisted the urge look down or touch her belly.

“Six years. Whew. Who knew?” She smiled as they both chuckled. She’d bet neither one of them would’ve ever guessed they’d be celebrating anything a year ago.

Theirs had been one crazy messed up journey, but she was sure that from here on out they were going to tackle life together—in their own spirited fashion, of course. She wouldn’t change him for the world. There was nothing they couldn’t overcome together. She wanted to be by his side for the rest of her life. The life, and family, they were building was better than her wildest dreams.

Felix tapped his pocket again, just to make sure. He’d gone out and given away a shit ton of money to be able to give Arabella the wedding ring she deserved then he’d had the bright idea to take it out of the box so she wouldn’t see it ahead of time. If that fucking thing fell out of his pocket and into the grass, he was going to have a heart attack.

He pulled the chair out for her and double checked that the outdoor heater was aimed at the table. There was a chill in the winter air but the night was so calm he hadn’t been able to resist decorating their new patio. He’d also made sure the hot tub was ready—they were definitely taking advantage of that new purchase tonight.

She nervously laughed which was accompanied by an equally anxious half smile. He sat down and watched her closely, the hairs on the back of his neck standing at her unease.

“Got everything done. Did you get Mr. Ott to the airport okay?”

Now that she’d officially joined the Wyn Security team they were unofficial partners on all assignments. He liked his team, but having Arabella by his side for a job made it ten times better.

“No problems.” He opened the covered dish of spaghetti and meatballs. Their favorite and thankfully easy to make. They were already married and lived together, but he was still preoccupied when it came to giving her the proper wedding ring combo.

She slouched back in her chair and crossed her legs. “Mmm. That smells so good. I’m starved.”

He grabbed for the claw spoon to dish the noodles onto their plates and it nearly slipped out of his hands they were so sweaty. Damn his nervous ticks. He finished filling their plates and sat back down.

She loaded her fork and brought it to her mouth then all of a sudden she set it down.

Their relationship had improved drastically and the new found open communication they worked on daily mostly deserved the credit. That and agreeing to live in the same city had helped them build trust.

Something was obviously bothering her—a new development because she’d been her normal self all day. If she was going to tell him right away instead of keeping secrets, then he didn’t even care what it was. All her words would be to him was progress.

He raised a brow.

“I mean,” she reached out and wrapped her palm around the top of his forearm, “there’s nothing wrong. I just received some news, and I’m processing it, but you need to do that with me.” She met his gaze and her amber eyes were so full of hope and excitement.

“Oh-kay.” He clenched his jaw and braced himself for anything—there was never boring news when it came to Arabella.

“I’m pregnant. We are going to have a baby.”

His body went still as hot and cold adrenaline flushed his entire system. “Pregnant?” Holy shit. He was going to have a family. A family.

“Yep.” The ends of her lips tipped up.

He smiled. I’m going to be a dad. He scooted his chair back and knelt on one knee in front of her. God he loved this woman. His wife. The mother of his child.

“I wanted you to have a proper wedding ring.” He pulled the silver circle with an emerald cut diamond from his pocket.

She nodded and squeezed his hand when he took hers in his.

“And now it means so much more.” He slipped the ring on the finger with her original wedding band. The set looked good together. Fucking great, actually. “Because whenever I look at that ring I’ll think of the second day in my life that you made me the happiest man on the planet.”

She leaned down, cupped his face in her hands and touched her lips to his.

“I love you,” she whispered and kissed him again, longer this time.

She chuckled. “I’m going to have to get used to that. Daddy.”

He laughed. He kissed her forehead as he stood. The love of his life was sitting across from him at their sixth year anniversary dinner, pregnant with his child. He officially had the best life.

Thanks for reading! Felix and Arabella are seriously my FAV!

Protecting His Heart is on the #kissapp 's Fall In Love shelf until November 18th. Get your copy today! ... See MoreSee Less