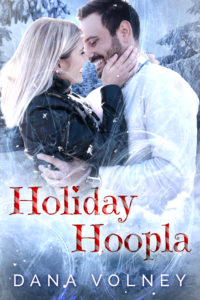 Halle Adams is in a bind. While she owns and operates a fun, eclectic gift shop, Just Dandy, her life is anything but. The family purse strings, which have a hold on her shop, have grown too tight for the independent, savvy Wyoming gal. Halle’s solution is to seek funding elsewhere, but when her loan request at the bank is denied, she’s left to ponder her options during what is meant to be the merriest time of the year. The holiday season ushers in Blake Ellison, who has recently found himself promoted at work, but demoted in spirit. Blake is tired of the chase and simply wants a no-hassle, no-commitment companion to accompany him to the bank-related functions the future president is expected to attend. A chance encounter gives Blake and Halle the perfect solution: She will go with him to the myriad of holiday events and he agrees to approve her loan application. But a barn dance, a black tie gala, and a fundraiser spark feelings of jealousy, protection, and attraction … emotions neither of them had on their holiday wish list. Will a business deal between strangers get hoodwinked by holiday hoopla?

“So, you need a gift for your sister?”

He turned and looked around the store. Halle took the opportunity to check him out. About my age . . . no ring. Why haven’t I ever met him before? This town isn’t that big. Halle bit the side of her bottom lip. Her “consequences-be-damned-there-is-fun-to-be-had” streak was pulsing through her body, and this cowboy made her feel like being naughty. Here I thought the holiday season was going to be boring.

The stranger peered over the rack of spices and miscellaneous cooking items. “I didn’t realize you had a bunch of different stuff in here.”

“Blue . . . okay. I have some blue necklaces I made over here.” She motioned to the glass cases that doubled as her front counter. “I also have a matching scarf and hat set in ocean blue.” She scooped up the items and held them toward him.

“Oh, those are nice. You make this stuff?”

“Some of it—mostly the necklaces.” She caught his gaze and lowered her voice in mischief. “Sometimes, when I’m feeling really sexy, I crochet.”

“That’s weird. So do I.” His lips started to curve up until the chirping sound of his cell phone suddenly cut it short. He retrieved it from his front jean pocket.

“Excuse me.” He turned his back to her and spoke quietly into the phone. All she could hear was mumbling.

Halle laid the crocheted set on the counter and spied her wine glass. Where does drinking during a transaction stand on the appropriate meter? Hell, I own the joint. The words of her father sounded off in her head causing an eye roll. She owned the business, not the physical store, as he’d so astutely pointed out in what had started as a civilized meeting last week.

“What?” Halle stopped in her tracks just out of reach of her glass.

She wracked her brain for what the problem could be. Maybe she’d had one too many glasses of wine. No, wait; she did a mental count. She’d only been on glass number two when whoever this was walked in and made her spill half of her new glass.

“No. Not you.” He pocketed his phone and looked at her. “Family issues.”

“Family, huh? They’ll getcha.” Yeah, that was clearly the best thing to say. Oh well, he’s nice to look at. She let her gaze wander down his nicely fitted jeans to his cowboy boots, and back up. After all, it was the holidays; everyone deserved a little happiness, right? Even her.

Blake Ellison continued to watch the woman. Can’t I have a moment of peace? I can’t even Christmas shop without . . . This gal has the right idea, drinking in the afternoon. That’s my kind of day. He wished it was just because of the holidays, but lately his life was complicated with unfair obligations that made him want to drink—a lot . . . a whole lot.

Blake assessed the friendly sales gal. Her blonde hair was tied back in a messy pony tail that was weirdly sensual. Her fresh face was a welcome relief from the overly made up women he usually encountered.

“I’m Blake by the way.” He offered his hand.

“Halle, nice to meet you.” She slipped her hand in his firmly. Strong. Good. Limp fish handshakes were the worst.