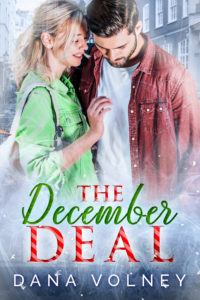 After her dad is diagnosed with an aggressive cancer, Lilia Carrigan returns home to Wyoming. The insurance company won’t cover the costs for an experimental trial that offers his best chance at surviving, and she needs a way to raise funds fast.

Vincent Morgenstern has had a year to fulfill the clause in his dad’s will that says if he doesn’t marry, he’ll lose out on inheriting the family business he loves so much. The deadline is New Year’s Eve, and he’s determined to get down the aisle, even if he has to pay the bride to be on his arm.

When Lilia overhears his predicament at a coffee shop, the crazy solution to both their problems seems obvious. What’s one year of faking it?

“From the beginning, “The December Deal” by Dana Volney had me smiling. … a guy hiring a girl to marry him for career advancement or to secure a position in the family company isn’t anything new.  However, Dana has managed to put a little spin on this premise.” –5 stars, Read Your Writes

“Romance, unforgettable characters and a joy to read, what more can a gal ask for?” — 4 stars, Pure Jonel

Anger coursed through her veins, but she was still in her right mind enough to know that she didn’t want too many ears listening in. In fact, tonight was supposed to be fun. It was Christmas. They were celebrating. And it had been fun—right up until the moment he’d pulled her into his arms and kissed her. He hadn’t even given her the courtesy of a regular kiss. Nope, his lips on hers had stirred the fire that had burned steadily for a week, fanning flames she had to stamp back down deep if she had any hope of surviving the year and not being utterly, emotionally crushed.

“I can’t do this any longer.” His hands were shoved deep in his pockets.

“So our being married isn’t even an issue for you anymore? It doesn’t even register as a problem?”

“It was never a problem.” It’s not like she hadn’t known what she was agreeing to—she just hadn’t expected to like him so much.

“Just a deal.” His gaze dropped to the ground.

“It is what it is. Why is this a problem all of a sudden?” It was hard enough to deal with her own internal struggle, but if he was going to be outwardly pissy now, she may as well give up. She didn’t have it in her to tell him one thing all the time while feeling another.

“I can’t live a lie.” His blue eyes set firmly on her as his jaw jumped.