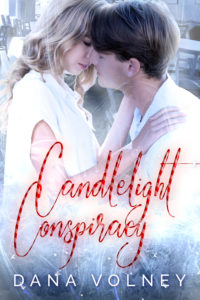 Sophie Graystone is a florist by day, a lead guitarist by night, and neighbor to an aloof restaurant owner all the time. But then her apartment building loses power during the holidays, and thanks to the wickless candle trend, she’s left with no light and a rumbling tummy.

What’s a guy to do but invite this crazy, beautiful whirlwind for a late-night menu tasting? Marc Sizzo’s too busy concentrating on making his new venture a success to fall in love. But sharing confidences in the intimate candlelight just might be the spark for a real relationship.

Marc’s sincerity, wit, and sexy body catch Sophie off guard and make her rethink her own approach to love . . . until his ex-fiancee shows up out of the blue and wants him back. Will the New Year blaze new hope for Marc and Sophie or snuff out this fledgling flame?

“Why did you think things were ending?”

“Just a feeling. Neither of us are looking for something serious, right?” She forced herself to look into his blue eyes. “Better to cut things off now rather than later.”

The silence was deafening, and there was no cover of darkness to hide under. There was no humor in his cheeks and no playfulness in the edges of his mouth. If there was ever a time she actually wanted a power outage, this was it. She closed her eyes briefly, taking in his sweet scent and wishing she were inside her apartment alone in order to sulk. Because, again, he wasn’t arguing with her stupid logic. He accepted it. Dammit.

“What’s so wrong with later?” He took a step toward her and cut the gap between them in half.

All of him was within grabbing distance. She could reach out and pull him tightly to her and kiss him with everything she had. Capture his lips with hers like they had no tomorrow and kiss him like they had a million tomorrows to be in love. With him, she’d felt like she’d found the last 10 percent of the equation she’d been missing in all other relationships.

“Later?” She did her best to keep her voice even. “Usually, later comes with emotions and unwanted feelings and general messiness. Later is never better.” She shook her head slowly.

“It could be.” His hard stare moved to her lips, then back to her eyes.

This time, passion appeared in his bright blue eyes, and he did nothing to hide it.