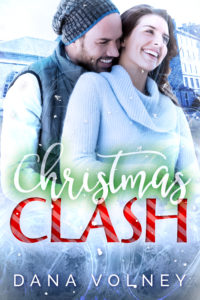 For the first time in her life, Candace Ellison is determined to stand on her own two feet. When the city council’s new convention center project threatens to demolish her new flower shop, Kiss from a Rose, she vows to win the fight without help from her wealthy and well-connected family.

But to keep her doors open, she’ll have to turn to an even unlikelier source—Luke Carrigan. Problem is she hasn’t been able to get along with the guy since that fateful day they met … back in kindergarten.

There’s more than building blocks and coloring books on the line now though. Luke’s recently inherited his family pub, and isn’t about to let the city put a wrecking ball through years of memories and tradition. This is his chance to show his family he can be more than just the fun-loving, favored son. … except Luke’s not exactly singing “Jingle Bells” at having to strategize with spoiled Candace.

The only hope they have is in finding some common ground. Will this Christmas bring miracles or the destruction of everything these old rivals love?

Tumbleweed Book Reviews says, “Once again Volney has created some witty characters. Try as they might to dislike one another, nothing can stop them from their real feelings. The entertainment is nonstop with Christmas Clash.” read more…

“…had me hooked from the very first pages. Christmas Clash is a fabulous holiday read but can certainly be enjoyable regardless of time of year.” —Wow-Women on Writing (read the full review)

“In CHRISTMAS CLASH, Dana Volney presents a plot-driven kisses-only romance that has believable conflict and a hero and heroine with backgrounds that make the plot increasingly interesting as the differences between them is slowly revealed. The awareness that Candace and Luke hide from one another keeps the reader on edge, and this author really knows how to use dialogue and motivation to build drama. Despite the title, holiday references are minimal, so readers will delight in this solidly written and satisfying romance no matter the time of year or the temperature outside. Well done, Ms. Volney!” — The Romance Reviews (read the full review) 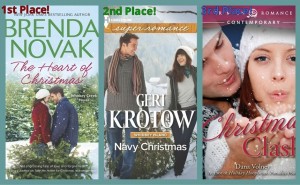 I am honored! Many thanks to Jennifer Snow and the judges!

Candace stomped back to her cozy flower shop, Kiss from a Rose. That guy. Thinks he knows everything. Of all the places she had to choose to locate her flower shop, she had to buy the one right smack dab next to Luke friggin’ Carrigan.

She’d never daydreamed about kissing Luke in high school or before, she’d never written their names together in her homework notebooks, and she’d never studied his body. Until present day. Setting up Kiss from a Rose right next door to the Carrigans’ family pub was pure coincidence, and one that had made her grimace internally and externally when she’d come face to face with him while painting her newly purchased walls.

She’d heard his unmistakable tone behind her and whipped her head around so fast her neck muscles stung.

His tall, defined build took up her doorway and stopped the sunlight from streaming through.

“Luke Carrigan,” she deadpanned as her mind raced to catch up. Why would he think she was stalking him? The bar next door. Dammit. How had it taken her until now to piece that gem together? “Just trying to make the neighborhood a better place.” She focused on his eyes, careful not to let her gaze roam. She couldn’t give him any upper hand. Especially not now. Great, just what I needed. It’s bad enough I’m new to having a business of my own but now I have to contend with Luke Carrigan? Just my luck.

“So you’re just doing the work for the real owner, then?”

“You wish,” she said. “I’m here to stay. I bet it’s going to suck to have someone around who won’t take your crap.”

If his dark brown polo hadn’t fit him snug around his biceps, she might’ve said something nice. But it did. He’d grown up well. Time had only created a handsome man. And one who knew he was handsome. Which, sadly, wasn’t totally unattractive. What are you doing? Don’t think of him like that. He’s bad news. He’s still bad news.

“I don’t mind at all. Because she surely doesn’t give it as good as she gets it.” With a proud chuckle at his own ridiculous try at a joke, he rolled from the wood door frame and ambled toward his pub. Those were the only few seconds she’d ever thought about selling her new building and setting up shop somewhere else, but the notion was just plain dumb. She would have to find a way to deal with him, just like high school.

And, just like school, they managed to stay out of each other’s way unless completely necessary—which was usually in the back parking lot that their businesses shared. Seven months into a neighborly relationship, it seemed their stay-out-of-my-way truce had now ended.

She made her way through her flower shop. The year-round bright green walls, crisp white flooring, and splashes of pinks were a welcome relief to all the mahogany in Luke’s dank bar. She tried to shake off the cold of winter—and Luke. The small white Christmas trees peppering her front room and cheerful ornaments hanging from the ceiling couldn’t help but bring a smile to her face. The holiday magic always conjured hopefulness, possibilities—this year, however, it had brought negative tidings.

“Who was that hunk of hottie?” Sophie Graystone asked as she finished repotting a large butterfly palm plant. “I’ve seen him around. I didn’t know you knew him.”

“He’s no one.” Candace rubbed her forehead before picking up a sprig of evergreen lying on the island workstation behind the main counter. The beautiful bouquet of dark, long-stemmed red roses for the customer who was apparently very sorry for his actions the previous night wouldn’t start itself.